The people we meet every day continue to amaze us—how far they have come. Where will they go next? Read about Kaisher, who was selected to be part of a four-day workshop in Design Academy, within the prestigious Art Centre Melbourne.

Design Academy with an Award-Winning Play 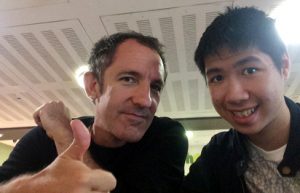 Kaisher with his mentor Pierre

I had the great opportunity to participate in a Design Academy which was held in connection with the play The Curious Incident of the Dog in the Night-Time.  Curious Incident is a play produced by the National Theatre in London and is currently touring Melbourne in a joint production with the Art Centre Melbourne and the Melbourne Theatre Company. It is a very big production that has played around the world. It has won 7 Oliver Awards in the UK and 5 Tony Awards on Broadway.

The Design Academy held a four-day workshop where the participants contributed to artworks inspired by the play to promote greater audience engagement. The new art was then showcased in the foyer of the Art Centre Melbourne, flagship of performing arts in Victoria. 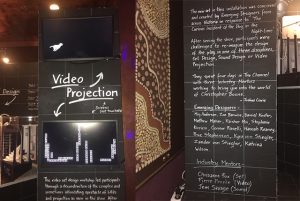 As my aspiration is to become a film editor, my mum thought that getting involved in this project will allow me to get very good exposure and learn from leading figures in the art and creative industry. At first I wasn’t that excited because there was no video editing involved, but after a few days of hesitation I decided to apply because I wanted to gain some professional experience. I was fortunate to be able to pass the one-day selection workshop and join six others to the four-day Design Academy.

The participants were first treated to seeing the play, Curious Incident. It was audio-visual mastery, with video projected from all sides of the stage along with dynamic audio. It was such an intriguing and awesome experience for me.

The Design Academy was held in The Channel located within the Arts Centre Melbourne: a high-tech learning lab with world-class recording studio and vocal facilities.  Here I learned an innovative software named TouchDesign. Try imagining a scrapbook on a cork board connecting newspaper article clippings to Polaroid photographs with pins and threads. Now imagine doing this digitally with pictures and videos to be projected. We also learned sequencing text and graphics. Under the guidance of our mentor, Pierre Proske, fellow participants and myself worked hard and created the output which has since been installed in the lobby of the Art Centre Melbourne. 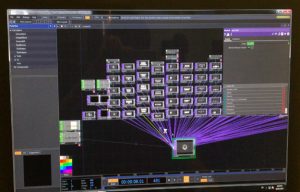 This is by far the most unforgettable experience for me—visiting Melbourne and being able to join the Design Academy in association with an international, award-winning play. Meeting with outstanding people and peers in the industry I got to learn new software and their application, as well as new skills on video and networking.

I am forever thankful to the following organisations and persons who made this happen:

Dr Rebecca Flower and Jason White from Specialisterne Australia, Joshua Cowie from the Art Centre Melbourne, and Pierre Proske, Mentor for the group.

Kaisher is a 19 year old student at SAE Institute in Perth who has been accessing services with the Autism Association of WA since 2012, transitioning from School Age Services to Therapy and Clinical Adult Services in 2016. Brett Murray, Kaisher‘s Key Therapist, meets with Kaisher and his support network regularly at home and at the SAE Institute. He receives support in areas of social skills, emotional regulation, organisation and independence.

I met Brett Murray about two years ago. We share some common interests such as Nintendo games and movies thus we never run out of topics to talk about.  Brett is a good listener and has taught me useful techniques to stay calm, overcome frustrations and challenges. He guided me towards achieving my life goals starting from basics such as how to conduct a good conversation, building a resume, setting up my LinkedIn account and compiling a portfolio. Through my meetings with Brett I have learned such a great deal and I am truly grateful to have met him.

For further information about the Association’s Therapy Services for Adults click on the button below.