Above photo: Jed at work

Following the many success stories we have reported from the Association’s AIM Employment Services, a highlight of the year has been Jed’s recent training placement with the much sought after employer, BHP Billiton—the world’s largest mining company. The position has been a long time in the making, with ongoing negotiation between AIM management and that of BHP, following an approach from AIM Employment.

The process was underway at an information meeting where 18 year old Jed’s name was tentatively put forward for a traineeship that would meet his IT skillset. An AIM Employment Consultant, Stephen, took Jed along to a lengthy ‘meet and greet’ session where they were shown around the centre. Steve has provided support for Jed throughout. BHP in Western Australia was obviously inspired by what they learned from those early meetings. A traineeship position has been created for Jed through BHP’s Integrated Production and Remote Operations (IPRO) diversity initiative, ‘Inspire Me, Inspire You’. This initiative seeks to “inspire people with disability to ‘Dream Big’ and reach their full potential”—a program instigated in WA.

Overseeing and monitoring ‘pit to port’ 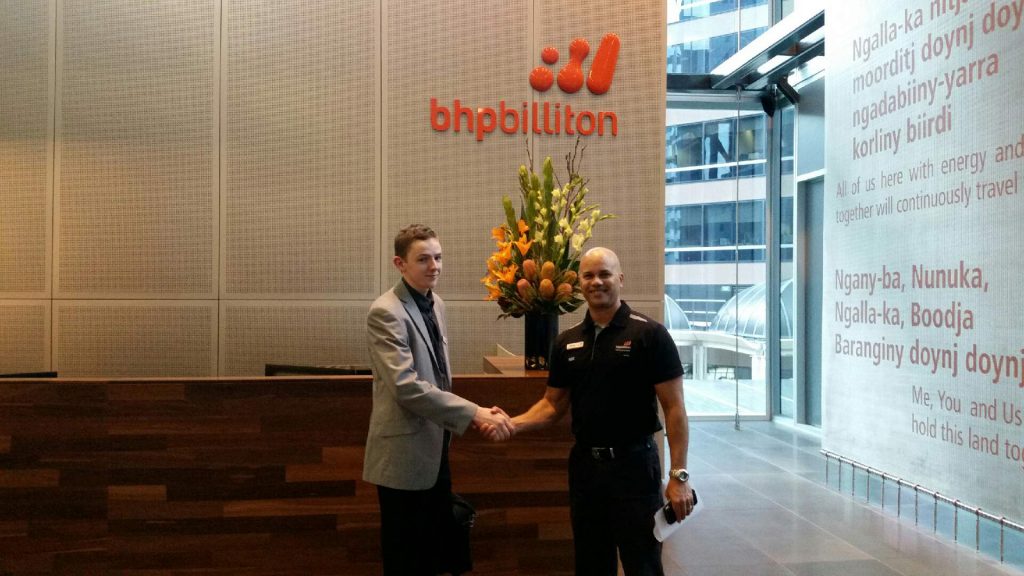 Jed is currently employed as a trainee Train Controller at a centre in St Georges Terrace, Perth. This is BHP’s Integrated Remote Operations Centre (IROC) where Jed’s role will entail ongoing communication with mine personnel at a remote site in Western Australia. At a later date, training will be extended to plant control. For Jed—as for all new trainees—training will be ongoing; there is no specified end date.  However, after six months most people are considered ready to take on individual responsibilities.

A BHP employee will always be working with Jed during this initial training period. He will be learning all aspects of train movements, plant infrastructure and machinery that are essential to the operation. The role, in which Jed will be one of a team, entails communication via a two-way headset with a Mine Supervisor/Team Leader to alert them of faults or impending faults. A complex fault might be detected, or something as simple as low hydraulic fluid in a roller that supports the vast conveyors moving the iron ore from pit to processing plant. Any faults detected at IROC are immediately conveyed to the site. Controllers in Perth can precisely pinpoint faults, saving numerous hours on site searching for the source of a problem. The monitoring system enables IROC staff to help schedule and maintain BHP’s mining operations—including shipping—by managing all information imperative to the movement of the iron ore.

Tapping into a talent pool

The ‘Inspire Me, Inspire You’ program is now a core strategy of BHP, with a view to the initiative being implemented Australia wide, tapping into the talent pool of people with diverse backgrounds. Jed will be well supported by both BHP and AIM Employment. Before the end of the year he will be heading north to the mine site for a real-time view of how things work and to meet the people he is likely to be communicating with, when he is back in Perth. We wish him great success with this career opportunity. Recalling his first pay packet from BHP, Jed told Steve how he couldn’t stop laughing and Mum couldn’t stop crying—we are sure that meant joy for both.

Currently, through AIM Employment, there are more than one hundred people with Autism successfully employed across Perth metropolitan area. Employers are becoming increasingly aware of the diverse talents and strong work ethic that people who have Autism may bring to their organisation.