This is about 5 year old Maddy who wanted to support a classmate who has Autism. Read about Maddy’s project—how a child with a heart of gold made lemonade (with a little help from Mum) and was able to generously donate to the Autism Association through her Lemonade Stand initiative. 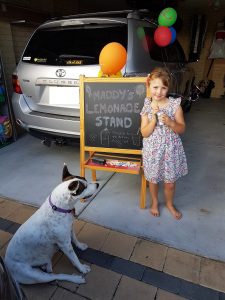 We had a great day, the day we held our lemonade stand.  A couple of weeks prior, Maddy had seen some girls doing a lemonade stand on Playschool on TV and asked if she could do the same.  Then that very afternoon, a friend of mine brought around a big bag of lemons, just by chance.  So I thought that has to be a sign and I told Maddy we would do it in the school holidays.

I gave her a selection of charities that mean something to us, to choose from, and their reasons why.  She picked the Autism Association as, yes, there is a child in her class who comes under the spectrum.  I wouldn’t say they are friends as such that they play together, but they do interact at school.  She wanted to give the money to him and I explained that we don’t give the money directly, but we will donate it to the organisation he falls under.

She helped me juice all of the lemons by hand, she made some chocolate crackles and iced and decorated the cupcakes and I also made some raw peppermint bliss balls (so we had a bit of a healthy option too).

Maddy also managed the stand by serving all of the customers (with just a little help from me with the money side) and did such an amazing job!  We tried setting up outside near the front verge but it was too windy, so we setup in the garage.  I was super proud of her.

She has already been asking when we can do it again.  When we get our next bag of lemons I guess!