Printing Industries Association of Australia (PIAA) is encouraging printers across Australia to employ people with Autism. PIAA Chief Executive Officer Andrew Macaulay says: “Given the right job those with Autism can be fantastic contributors.” He believes that employing a worker with Autism can have a resoundingly positive effect on business efficiency and productivity. The partnership between Printing Industries and AIM, the Autism Association of WA’s employment service, is proving to be of great benefit to both the industry and for people with Autism now working within the printing industry. 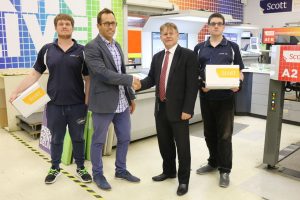 A benchmark for others

The Autism Association Employment Executive Manager Russell Thomas points to the strengths of people with Autism which serve them well in the printing industry and elsewhere—their ability to work where it entails following a process, their eye for detail and their accuracy. He tells how they can focus on something for a long period of time without getting bored. Andrew Macaulay agrees, asserting that their attention to detail is often set as a benchmark for other employees. Russell Thomas nominates some of the industries in which people with Autism often excel—“IT, print and surprisingly, to us, hospitality”.

Andrew Macaulay says that ten printers in Western Australia have already engaged with the Autism Association and hired workers, including Perth’s Scott Print. At Scott Print two full time team members who have Autism, Nathan and Elliot, have been employed, both working alternately in the dispatch and factory area. PIAA’s Andrew Macaulay quotes the General Manager of Scott Print, John Scott, who says the work performed by people with Autism “surpassed a level of perfection they had never seen before”.  This included a stack of hundreds of stapled booklets “where the staples were flawlessly aligned.” Again, referring to Scott Print, Andrew Macaulay tells that Scott has noticed how the presence of people with Autism has generated a positive atmosphere for all of his employees: “It’s almost like a maternal or paternal instinct comes out in staff. We want to encourage other printers and manufacturers in WA to get behind it.” 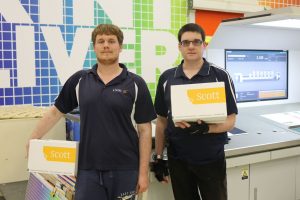 Nathan says his work at Scott Print is well matched to his work ethic, as he prefers (again surprisingly) a constantly changing and fast paced atmosphere. Fellow worker, Elliot, says that his job seeking process through the Association’s AIM was simple. He speaks of being shy with new people, so the Association’s help with Interviews and phone calls was “another good thing”.

The feedback from PIAA and Scott Print highlights the ongoing work of the Association’s AIM Employment and Community Options Services— the wonderful benefits for people with Autism and for employers and the community at large, when  people with Autism are acknowledged for their unique skills and receive the appropriate support.

Our First Steps children have been enjoying a great night’s rest on their soft, colourful and fun Monster Smiles pillowcases!  Joe, who at only age 13 runs Monster Smiles, is on a mission to act as a role model, inspire acts of kindness, create smiles and raise awareness of Crohn’s Disease. After lengthy stays in […]