The following story was recently submitted by Kirk Cetinic about his journey with Autism and his greatest achievement thus far: 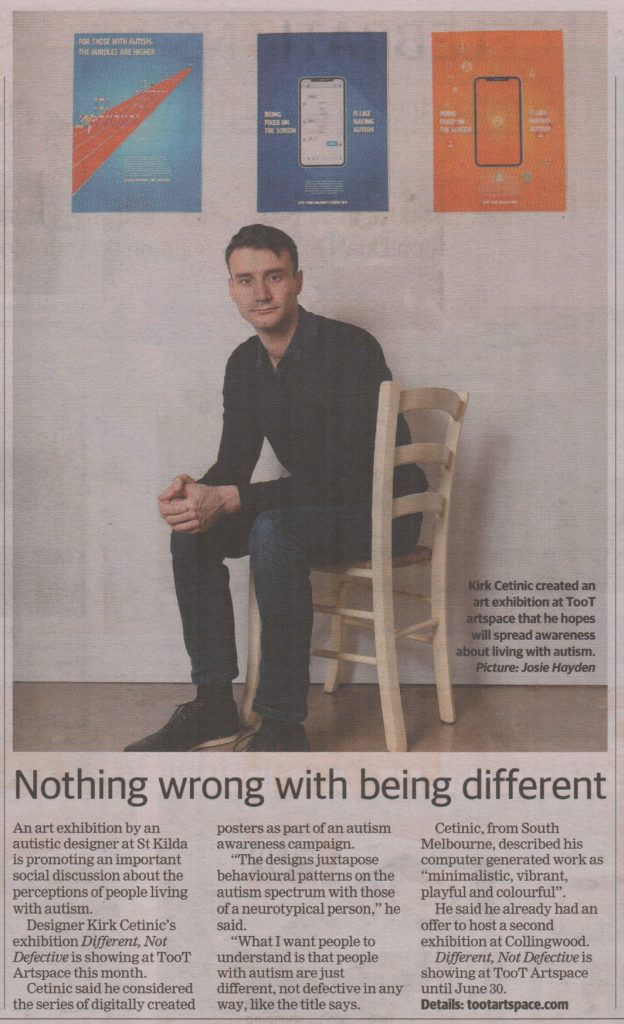 My name is Kirk, I’m 27 years old. I have graduated from Swinburne University in Melbourne, having completed a Bachelor of Design, with a Graphic Design Major. I am now working as a freelance graphic designer and I’m now on the path to becoming a web designer and Autism advocate, I am hoping to utilise my design and communication skills to educate the public about Autism and raise awareness of the difficulties people on the spectrum face when seeking employment.

Before my degree in design, I completed certificates in Transition and Work education, which was designed to help individuals with intellectual disabilities enter the workforce. I have also done VCAL, an alternative to VCE. In 2013, I transitioned into mainstream education by doing TAFE Courses in Graphic Design. My transition was so successful I won the Dean’s Outstanding Achievement Scholarship. In 2015 I was also employed on a casual basis at RAW3D, a 3D modelling and rendering studio, where I created 3D models for off the plan properties.

I consider my greatest achievement so far to be my exhibition titled Different, Not Defective at the TooT Gallery in St. Kilda in 2019. It consisted of eight posters imaging the challenges of Autism contrasting both the experience and perception of those on the spectrum to neurotypical people. Excessive screen use linked to Autism-like traits in children was also addressed, as it is an area of concern for educators and parents.

I am an Autistic designer with an excellent visual memory. I like to problem solve. I am a visual thinker. My visual thinking skills allow me to define and fill the gaps. With every design project, there is a problem. An issue, a pain point. Intuitive ideas are what solve problems in design.

My poster designs consist of dynamic, geometric, minimalist forms and repeating patterns. I also use gradients, which adds visual depth. My division of graphical elements is carefully managed and structured within a conformed grid utilising bold Sans Serif typography. The posters are the result of being influenced by graphic designer Jacob Cass and Op Artist Victor Vasarely. I collect imagery for inspiration, such as photography and advertising examples to start the development process. I devoted more time to researching and developing the concepts than I did creating them.

During the research phase, I came across some interesting, yet disturbing facts. There is high unemployment and mortality rates among autistic people in comparison to the general population. The connection of autism like traits in children developed through excessive screen use is labelled Virtual Autism. This along with screen addiction is a worrying trend for society. I created two additional posters which raise awareness of this connection and thus encourage parents to limit the amount of time their children use smartphones and tablets.

I ended up finding a gallery in St. Kilda, Melbourne called the TooT Artspace to host my exhibition. Part of the exhibition included a video of my working history for the Spectrospective Campaign, run my Amaze Inc, where participants create videos expressing their personal experiences being on the spectrum. It was a highly successful exhibition. It was attended by members of a local Autism community, called the Aspie Rebels. Two people worthy of note who attended my exhibition was Jody Dontje, a TEDx speaker, international humanitarian and teacher, who also works with children on the Autism Spectrum and Penny Robinson, an Autism advocate and speaker.

I later used my exhibition work as a focal point for a presentation I gave at Albert Park College, where I addressed integration aides and teachers. I talked about my educational passage and passion for being a designer and Autism advocate.

This was followed by the Aspect and Autism CRC Future Leaders Program. It was an amazing opportunity to fly to Sydney with the team and attend a series of workshops to learn and discuss the fundamentals of advocacy and goal setting. This opportunity has created a foundation for me to build on, to further enhance my skills as a designer and autism advocate.

My exhibition concluded. A great sense of achievement came over me because I believe my exhibition had generated great interest and made a difference to the perception of Autism in the community. I am continuing my journey and education, where I will undertake a postgraduate in web and user experience design.

In conclusion, I hope my passion for design will inspire, celebrate and reinforce acceptance of neurodiversity and social inclusion. This can be a metaphor for life, a disability does not equal impossibility – it could equal potential and advantage. After all, we are all different, not defective. I would also encourage those on the spectrum to take risks, persist with finding opportunities and to not be discouraged by failure.

Thank you Kirk for sharing your story with us!